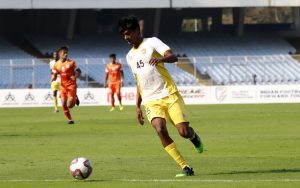 The I-League is a platform for professionals from various nations across the world to showcase their footballing talent. However, for Chennai City FC’s Singaporean import Iqbal Hussain, who is of Indian origin, it is so much more.

“My grandfather is from Kodaikanal in Tamil Nadu. My dad speaks Malay and understands Tamil. Growing up in Singapore as an Indian kid is nice and coming here to India makes me feel like I am at home. Both my grandparents passed away a few years back and it’s sad that I am playing in India now and they are not there.”

“I’m really happy to be here, and I hope they are proud of me in terms of me coming here and playing football. I always wanted to come to India and now, playing football here is just special. It’s just the best,” Iqbal shared in a candid chat with I-League Media.

The 27-year-old, who has seven caps for the senior national team of Singapore, shared his experience of life in India so far and admitted that one of the things that he wanted to experience was a simple ride in an auto-rickshaw.

“During the pre-season, we didn’t have much free time to spend in Chennai as we had back-to-back training and the schedule was tight. It was nice though that I got to travel in an auto. I always saw it in Indian movies but to finally get to ride in it was a really good moment,” he smiled.

A versatile player capable of playing in any position across the attacking third, Iqbal already has two assists to his name and is among the top playmakers in the league with the most key passes and third-most passes into the penalty area. He talked about how knowing Hindi and Tamil has helped him gel with his teammates and revealed how he is a big fan of superstars Shah Rukh Khan and Vijay.

“In terms of language, I haven’t faced any problem as I can understand Hindi and Tamil. It’s easier for me to mix around and I even help the other foreign players with translation. I like to interact with the local players and ask them questions so that I can learn a bit more and improve my Tamil and Hindi. I enjoy listening to Hindi and Tamil music, and recently, the boys made me watch the movie Master. We had a great time!” he exclaimed.

“I watch both Tamil and Hindi movies. Hindi cinema is famous in Singapore as well and I grew up watching these movies with my sister and parents. I’m glad that I’ve come to India, which is the birthplace of Bollywood. My favourites actors are Shah Rukh Khan in Bollywood and Vijay Thalapathy in Tamil. I’ve watched ‘Rab Ne Bana Di Jodi’ six times in the cinema! My mum thinks I’m crazy but it’s Shah Rukh Khan,” Iqbal beamed.

PLAYING IN I-League ‘MUCH MORE DIFFICULT’

The transition to a new country and environment off the field has been smooth for the Singapore international and on the pitch, Iqbal feels that playing in the I-League is ‘much more difficult’ as compared to the game back home.

“The I-League is quite aggressive and quite high in terms of intensity. The players are physically strong and fast, and it is much more difficult here as compared to Singapore. I’m quite happy that I can adapt to this kind of football and I am glad to be here. India certainly has a good future in football,” he shared.

“I came here well-prepared physically and mentally. I played high-intensity football for the Singapore national team as well. I’m happy that I’m doing well here. I always dreamed of coming to India since I was a kid and now, here I am playing football in India,” Iqbal expressed.

The winger, who played in a number of top-division Singaporean clubs like Courts Young Lions, Hougang United and Geylang International FC, talked about the role played by head coach Satyasagara in his move to Chennai.

He said, “I got a call from coach Satyasagara one day and he asked me if I wanted to play in India. He said we want to sign you for CCFC and even one of my ex-teammates in Singapore, Joseph Kaplan also played for them in the title-winning season.”

“Coach Satya is the main reason I am here. I have played under him since I was 15-16 years old and it is nice that the coach believes in you in terms of your talent and quality. It makes it easier to play here and I want to give my best for him and Chennai City FC.”

‘WANT TO LEAD BY EXAMPLE’

Taking a trip down memory lane, Iqbal shared the journey of how he became a professional footballer in Singapore and termed national team skipper Hariss Harun, who is also of Indian origin, as one of his role models.

“I started playing football in primary school and my dad was shocked initially when he saw me play football at a trial. He didn’t know I could play! Eventually, I became more passionate about the game and I would train alone at times. I believe in making use of the talent given to me by God, so here I am,” he smiled.

“It’s not easy to be part of the senior national team at a young age like 17-18. I made a lot of mistakes in terms of football but I have learned from them through advice from my teammates and coaches. One of my idols is Singapore captain Hariss Harun, who plays in Malaysia and is also of Indian origin. He’s an inspiration for all the Singaporean boys back home and I have been learning a lot from him and getting advice from all seniors.”

“I have matured through that advice and experience. I want to lead by example now. Being a part of the senior national team is every boy’s dream and I am quite happy and blessed to be able to represent my country. I want to keep going strong in India now,” he concluded.