Germanpreet Singh is back and raring to go for Jamshedpur FC!

Press Release 2023-01-16 Indian Super League Comments Off on Germanpreet Singh is back and raring to go for Jamshedpur FC! 340 Views 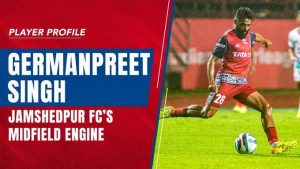 Germanpreet Singh is back and raring to go for Jamshedpur FC at a very crucial time. With the season entering its business end, the Men of Steel will look to make a final dash to pick up as many points as possible and push up the Indian Super League table.

Germanpreet is one of the players who was expected to play a major role in Jamshedpur FC’s push forward this season after winning the League Shield last season, but injuries have been a major setback in the Punjab native’s progress at the club.

That being said, his influence in midfield is there for all to see, and his brilliant cross for Ritwik Das to score helped Jamshedpur FC pick up all three points against East Bengal FC last time out.

Making his mark from a young age, Germanpreet’s career took an upward turn when he signed for Goan club giants Dempo SC in 2015, and became a key part of the outfit’s journey.

His performances at the club caught the eye of top ISL clubs, and it wasn’t long before the midfielder joined Chennaiyin FC on a permanent basis.

The 26-year-old played a major role in the Marina Machans’ push for ISL glory, and helped them win the league in 2017-18, emerging as a player for the future.

Germanpreet’s performances were noticed on the national level as well, with the man from Gurdaspur making his India debut and representing his nation multiple times over the years.

After many successful seasons at the South Indian club side, Germanpreet sealed a move to Jamshedpur FC at the start of the 2022/23 season. While playing time has been limited with some injury concerns, a fresh Germanpreet is now raring to go, and has a strong end to the season in mind.

The next game for the Men of Steel is against Bengaluru FC, and with Germanpreet expected to start in midfield, fans can expect the team’s engine to be in safe hands and run like a well oiled machine, capable of continuing the winning momentum and taking the club to a higher position.

With the introduction of new signings Pronay Halder and Rafael Crivellaro in midfield, Germanpreet perhaps has the support around him to flourish, and going by his performance off the bench last time out against East Bengal, it is clear that his best is yet to come.