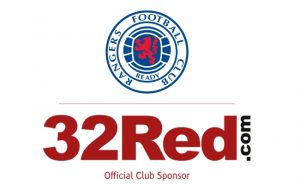 Glasgow Rangers FC have confirmed an extension to their partnership with 32Red, the UK’s multiple award-winning online casino.

32Red will remain as principal club sponsor until 2021, which will be their seventh consecutive season.

The deal continues a successful partnership which has already seen 32Red as official club sponsor of the club as they won promotion from the Scottish Championship and regained their position challenging for the Scottish Premiership.

Part of the Kindred Group, the 32Red logo will remain proudly on the front of all of Rangers first-team kits and will also see their branding appear across the official club training wear and in-stadium for the 2019/20 and 2020/21 seasons.

Rangers managing director Stewart Robertson said, “We’re delighted to continue our relationship with 32Red for the next two seasons.
“They have been a loyal supporter and partner of the club since 2014 and we are pleased that their brand will continue to be on the front of our shirts.”

Neil Banbury General Manager UK at the Kindred Group said, “32Red’s partnership with Rangers has been hugely beneficial for our business and we are thrilled to have extended that association once again.”

“At 32Red, we are committed to reinventing the sports sponsorship model, so it benefits the whole community. The extension of our relationship with Rangers will afford us a unique position to support the local community and those who need it most through initiatives such as the ‘Big Sleep Out’ which helped fundraise for Glasgow’s homeless.”

“Steven Gerrard’s appointment as manager at the start of the season, a Premiership title bid and the return of European football is exactly the opportunity we saw back in 2014 and we look forward to many more exciting days and nights at a packed Ibrox, like those we have been enjoying this season.”

“We would also like to take the opportunity to thank all the staff at Rangers for their support over the last five seasons and we are excited to see where the next two take us.”