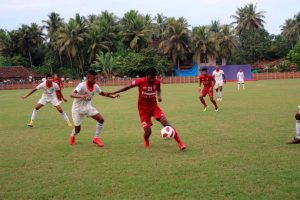 Sporting Clube de Goa and Churchill Brothers SC played out a 1-1 draw in the Goa Pro League match played at Rosary Ground in Navelim on Tuesday.

The result takes Sporting Goa to 13 points from seven matches while the Red Machines have 12 points from six matches.

Churchill Brothers enjoyed the better share of possession in the first half and took the lead at the half hour mark through Cyrus Noronha when Nicholas Fernandes ran down the left flank and played in a perfect delivery in the box, which was finished brilliantly by Cyrus, heading past the helpless keeper.

Sporting Clube de Goa had not many chances in the first half. Churchill Brothers’ Uttam Rai missed a sitter for the Red Machines as his poor decision making saw his effort denied by the rival keeper, from a scoring opportunity.

James and Umesh were the other Red Machines players who missed chances. Crossing over, it was all Sporting Clube de Goa game, however, Churchill Brothers had more chances as compared to their opponents due to their counter attack play.

Finally Sporting Clube de Goa levelled terms in the 58th minute through Marcus Mascarenhas who connected a brilliant half volley.

The introduction of Victorino Fernandes for Sporting Clube de Goa gave more dimension to their play and the striker almost scored late in the game but he shot wide from an acute angle with only the keeper at his mercy.