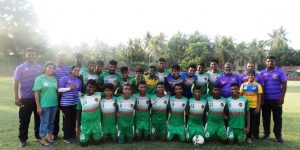 Salgaocar FC are the Goa State Under-16 champions after defeating Sporting Clube de Goa at the Rosary Sports Complex in Navelim. The Greens came back from a goal down; scored by Sahil Halarnkar for Sporting Goa via a Chaitan Komarpant brace and skipper Ribhav Sardessai netted the final goal of the evening.

The high octane match began with both team attacking the ball from the word go. The Flaming Oranje were able to make the most of it by retaining & passing the ball around well. Sporting drew first blood for the evening after Stendly Fernandes was unstoppable flew past Sydroy Baptista and took a shot which Antonio Da Silva did well to save but the ball however rolled back into play for Sahil to take advantage and place it beyond the custodian. The Flaming Oranje lads were back to haunt Antonio who this time latched onto Stendly’s shot. The Greens although shaken from the early blow & mounting pressure found their way back into the game and came up with some good moves and attacks of their own. Ribhav making the first clear attempt for the Salgaocar lads in the 25th minute but the skipper’s shot was saved by Akshat Hadlonkar. The lemon break was called with Sporting Goa in the driver’s seat with a 1-0 lead.

In the second half Chaitan began to unleash himself down the right flank creating all sorts of trouble for the Sporting Goa defence. The Flaming Oranje citadel fell after the young Green restored parity in the 42nd minute when Flan Gomes smartly dribbled past a pair of defenders to set him up. This seemed to breathe life into the game. The Salgaocar colts were on the hunt and were not ready to give up. In the 77th minute Chaitan finished his brace after piercing the defence on the right wing to receive Johan Gracias’ pass and send it to the back of the net. Ribhav signed off for the evening with a thunderous shot from the edge of the box to inflate the scoreline to 3-1 in favour of the Greens.

As the referee blew the final whistle; the Salgaocar lads’ joy knew no bounds to celebrate their coronation as Goa’s Under-16 Champions.

@Arunfoot
Previous AFC Cup: Bengaluru FC go down 0-3 to JDT in Malaysia!
Next Reliance Foundation Young Champs to play EPL clubs as part of their development!