AFC Cup: Bengaluru FC go down 0-3 to JDT in Malaysia! 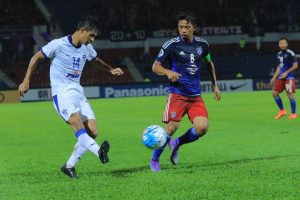 Bengaluru FC couldn’t make a strong first-half performance count as the Blues conceded three times in the last 20 minutes to go down 0-3 to reigning AFC Cup champions Johor Darul Ta’zim in an inconsequential Group H tie at the Tan Sri Dato’ Haji Hasan Yunos Stadium in Johor Bahru, Malaysia on Wednesday night. Goals from substitute Safiq Rahim, Safee Sali and Shakir Shaari made sure the Malaysian champions maintained a 100% win record in the group stages of the competition.

Having already qualified along with Johor for the Round-of-16 but with no competitive game to play before they take on Kitchee SC in Hong Kong, the Blues rolled out a full strength first XI in a bid to earn some valuable game time.

Meanwhile, Johor, with an eye on the Malaysia FA Cup final to be played in three days, rested their foreign players while starting the influential Rahim from the bench. Bengaluru FC had a really strong first fifteen minutes where they took the game to the champions. Michael Collins came close in the 5th minute when he did well to steal the ball off Amri Yahyah on the edge of the JDT box before his attempt to curl in a low shot went wide. The Blues couldn’t make the most of a flurry of corners as Johor slowly started getting a grip of things and the first half ended goalless.

Johor had a big chance early in the second half when a move in the Blues’ box left Sali with only Amrinder to beat. But the striker’s shot ricocheted off the crossbar and to safety as the hosts upped the hunt for an opener.

The breakthrough finally came in the 70th minute after Rahim’s strike from on top of the box took a huge deflection off John Johnson’s outstretched leg on its way to the goal as a wrong-footed Amrinder could only watch in despair.

Johor then made it 2-0 in the 78th minute when Sali made amends for his miss earlier in the half. With the ball at his feet, Rahim spotted Sali’s sneak between Bengaluru’s defensive lines, sliding it perfectly for the No.10 whose left-footed finish was too perfect for Amrinder to stop.

The Blues responded immediately when Udanta Singh slid Collins through, leaving the midfielder one-on-one with ’keeper Farizal Marlias. But the JDT shot-stopper came off the blocks in time to thwart Collins who looked to lift it over Farizal. The Blues’ next chance came from the resultant corner when Johnson had a clear header to bury but saw his attempt come off a JDT body in the box.

But as if these two chances weren’t close enough, substitute Daniel Lalhlimpuia came agonizingly close in the 86th minute when he beat his marker and shot from a tight angle only to see the ball roll along the goal line on its way out.

Johor’s third goal came in the 90th minute when Rino Anto’s high foot in the box caught Sali prompting referee Turki Alkhudayr to point to the spot from where Shaari sent Amrinder the wrong way.