Second Division League: Dempo are held by Mohammedan Sporting to a draw! 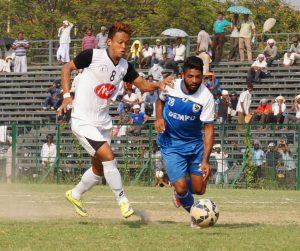 Kolkata giants Mohammedan Sporting Club suffered a major setback in the race for the promotion to the Hero I-League after a goalless draw against Dempo SC in their final round clash of the Second Division League on Wednesday.

The draw at the Fatorda Stadium has not done the Kolkata outfit any favours, who now have 12 points from 8 games and have fallen five points behind Dempo SC. However, the result would definitely encourage Minerva Academy FC who are on 15 points having played the same number of matches.

Going into the match Mohammedan Sporting coachr Subrata Bhattacharya Jr. made only one change to the side against LoneStar Kashmir FC by handing a start to Sheikh Faiaz over Nagen Tamang.

In a game involving high stakes both the teams started off with caution. However, Mohammedan Sporting were more organized in attack but were not able penetrate into rival box as the Dempo defenders done well to keep the strike pair of Ajay Singh and Simabarashe Gate in check.

Ajay, who was man-marked from the beginning, had the first chance to put the visitors ahead but his effort from Antoni Soren’s pass was denied by the rival custodian Laxmikant Kattmani in the 19th minute. Dempo, on the other hand, came close to scoring on a couple of occasions through Romeo Fernandes and Felix Chidi Odili but the Mohammedan Sporting defence thwarted their attempts.

Changing over, Mohammedan Sporting kept on probing into the Dempo half and they came close with Ajay and Faiaz but Kattimani pulled off some good saves, which build frustration in the Mohammedan Sporting dugout. The Black Panthers put relentless pressure on the rival defense in the last 15 minutes of the game, but Dempo managed to hold on defending deep as the game ended scoreless.

Mohammedan Sporting now travel to Gangtok where they take on Gangtok Himalayan SC on Thursday, May 19.