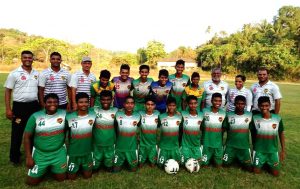 Salgaocar FC claimed bragging rights as champions of the South Zone in the GFA U16 League after the final fixture was played at Curtorim grounds on Monday. Chaitan Komarpant lead the way, as Aaron Barreto, Frazer Gomes, Avner Barreto & Ribhav Sardessai followed suit scoring a goal each for the Greens against Quelossim SC.

Proceedings began early as the Vasco outfit saw much of the ball & began to haunt the Quelossim defence. Ribhav showed the team’s confidence as he sent a rasping shot from 25 yards out in the 5th minute which hit the vertical post & left it & the crowd trembling. Riston Colaco set up Chaitan with a 1–on-1 against the opposing custodian in the 22nd minute but the young lad failed to make most of it. 11 minutes later opportunity presented itself to Chaitan in a similar fashion as this time Flan Gomes sent in a cross from the right. This time however the midfielder didn’t fail as he dribbled past the goalkeeper as he opened the proceedings for the rest of the evening. Aaron doubled the lead for the Vasco side in the 39th minute as Chaitan turned provider this time. The score stood 2-0 in favour of the Salgaocar lads at half-time.

The Quelossim lads resumed the 2nd half with a renewed spirit as strikers Sevon Costa & Oscar D’Souza seemed to combine well & posed quite a threat to the Salgaocar defence who stood tall as Sydroy Baptista was able to deal with most of the attempts. On the other end Valenton D’Souza seemed to have pulled his socks up as he thwarted multiple forward lunges from the Greens & disrupted their attacks. But Flan found his groove on the right wing & set up Frazer to score the 3rd goal in the 61st minute. Just 6 minutes later Flan again disrupted the Quelossim defence & assisted substitute Avner in making his presence felt. Flan seemed to be unstoppable as he couldn’t help himself from contributing to the 5th & final goal as skipper Ribhav’s shot didn’t miss the target this time. With this the Salgaocar colts have claimed the top honours in the league’s South Zone.