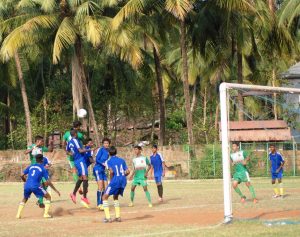 Salgaocar FC Under-18s defeated Patrong Sports Club in their 3rd fixture of the GFA U18 League held at Chicalim Ground. Liston Colaco netted a brace while Devendra Murgaokar provided both assists & also scored a goal for himself to ensure the Greens remain unbeaten.

The first half kicked off with the Salgaocar lads playing an attacking brand of football. Liston saw his 1st attempt on goal in under 5 minutes via a free-kick which if not for Euraldo Neues’s quick thinking would have been his 1st for the evening. In a bid not to be outdone Dishu Singh & Veryl Fernandes of the Patrong outfit came up with a few good moves towards the Salgaocar goal but were denied by Flagan Rodrigues & Stephen Alvares. Liston saw the back of the net for the 1st time in the dying minutes of the first half as Devendra mad a blazing run down the right flank to beat Patrong SC’s defence & send a cross to which the former obliged as he sent the keeper in the opposite direction. The Greens entered the lemon break with the sole goal to separate the sides.

The second half turned out to be fruitful for the young Greens as they mounted the pressure to move forward. The 47th minute of the game saw Liston complete his brace in a similar fashion as Devendra sent a cross from the right for the striker to head it home into the back of the net. The final goal came as the provider of the 1st 2 goals turned out to be the scorer of the final for the evening via a Shayne Rodrigues corner. The game ended with the Greens remaining undefeated in their 3rd fixture of this league.