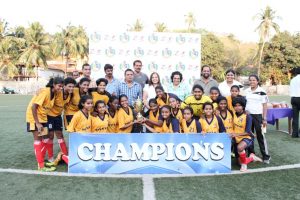 Goa XI were led by a fine hattrick by substitute Somaaya Mukundan.

Goa XI started the final match in an attacking pace and kept pounding the opposition goal, which gave no time for the Tibet team to settle in the game. Vailanka D’Souza opened the scoring for Goa XI with a simple tap in goal off a nice pass received from Cianna Lobo. The early goal broke the momentum of the Tibet team and Goa XI controlled the pace of the match from there on. A goal mouth fumble led to an unfortunate own goal in the 17th minute to push the lead further to 2-0 for Goa XI.

In the 20th minute of play, Velanie Fernandes gave a nice through ball pass to Vailanka D’Souza who did a nice turnaround dribble that beat the defender and deftly placed the ball in the back of the net to put Goa XI up 3-0. Tibet midfielder Ngawang Otsoe and inspirational captain Jamyang Chotso tried to motivate the team and kept the possession of the ball for a brief moment in the midfield.

Goa XI coach Juliet Miranda brought in Somaaya Mukundan and she got into the action right away by scoring a goal in the 24th minute of play using her pace to beat off 2 defenders and the Tibet goalkeeper Tenzin Dekyong. Goa XI lead 4-0 at the half-time.

The second half started with the Tibet team looking eager to pull a goal back but the Goa XI defence line marshalled by Cynthia Lobo and Linda Colaco gave no room for Tibet forwards to make any shots at the Goa XI goal. Lhakpa Bhutti, Sonam Dolma and Rithar Dolma worked tirelessly for the Tibet team throughout the match. Somaaya Mukundan increased the lead to 5-0 by scoring a fine goal off a pass from left winger Anline Fernandes in the 33rd minute of play. The match in the second half was confined to the midfield and Tibet players made a few attempts at goal and showed their skills. Somaaya got her hat-trick with a nice goal with a good volley that crashed into the nets in the 46th minute of play off a pass from Cianna Lobo. The match ended with Goa XI winning the match 6-0.