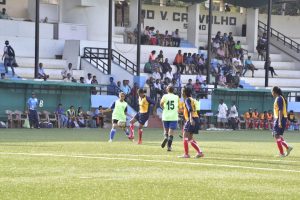 The Goa Football Association after a lot of groundwork and preparation have created and launched platform for official competition with the Festival which will be followed by a Women’s State League later in the year. The GFA has collaborated with Zest Concepts, a Goa based sports consultancy as able partners to help promote the event.

Goa first found its mark through the boots of Valanka D’Souza who capitalised off a feeble shot from the Gujarat goalkeeper Vruddhi Raisingani. The Gujarat girls who are within the 14 & 15 age group put up a brave fight but the Goan girls were too good for them.

Susmitha Jadhav scored the second goal from inside the box while Velanie Fernandes Captain of Goa XI sent in a beauty from a penalty shot offered to Goa after Gujarat defender Anchan handled the ball in the box. The fourth and the fifth goal came in quick succession with Nevilla Colaco scoring a brace before the referee blew the whistle for the breather.

The second half saw Goa continue their rampage with Somaaya Mukundan scoring the sixth goal while Cianna Lobo knocked in the seventh goal. The Gujarat girls suffered another set back with their striker Mansi had to leave the pitch due to an injury. The eight goal came from the boots of Somaaya Mukundan scoring her second of the match while Susmitha Jadhav also bagged her second goal scoring Goa’s 9th goal.

With Goa XI now moving into the finals scheduled for May 7 they await the winners of tomorrow’s other semifinal between Tibet Soccer and Viva North Goa.