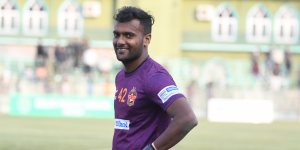 Against Real Kashmir FC in the third-round I-League match, Shibinraj Kunniyil of Gokulam Kerala pulled off one of the best goalkeeping performances you will see this season.

The 29-year-old made 10 saves in a goalless stalemate, earning a valuable point for his side on the road and picking up a well-deserved Hero of the Match Award. To do so in the chilly conditions of the Kashmir valley was even more commendable.

“The weather conditions were extremely difficult in Srinagar. We came from a tropical climate and to perform well in such cold conditions was challenging for us,” said Shibinraj. “Moreover, we were playing on an artificial turf, which we are not used to at home. Even though we didn’t get full points, the players did well in such harsh conditions,” he added.

It was Shibinraj’s third consecutive clean sheet this season after a 1-0 home win over Mohammedan Sporting on the league’s opening day and another 1-0 victory away at Aizawl FC last week.

The goalkeeper hailed his teammates’ combined effort in a near-perfect start to the Malabarians’ title-defence. “We have been able to keep clean sheets so far, and that too in two away matches. The main reason is the team game we played. Each one of us has contributed to our results and it has had a great impact on the overall confidence of the team,” Shibinraj praised.

Putting on strong performances away from home is crucial this season, according to Shibinraj. “Unlike last time, matches are taking place home and away, and getting maximum points from away games is very important. If we can keep the momentum going, we believe these points and clean sheets will be very helpful in the long run.”

Shibinraj made his I-League debut for Mohun Bagan in 2017. He first joined the Malabarians for the 2018-19 season before leaving for Kerala Blasters the following season. After spells with Churchill Brothers and Sreenidi Deccan in the last two seasons, the custodian is back at Gokulam Kerala, a club he considers his true home. With back-to-back I-League titles to their name, the Malabarians have come a long way since Shibinraj was last there.

“Gokulam is from the same city that I am from (Kozhikode). So rejoining here is like coming back home. The last time I played here was our second season in the I-League. Since then, the club has grown exponentially in Indian Football. I am happy to be part of the club and we are aiming to complete our hat-trick of titles this season and create new chapters in Indian Football history,” he hoped.

Born in Kozhikode, Shibinraj’s association with football started at an early age. “During my academy days, I used to come to the EMS Stadium in Kozhikode as a ball boy during Viva Kerala’s I-League matches. So now I feel very proud to be a goalkeeper for a team that plays in the same stadium,” he shared.

Recalling his Indian Football journey, the 29-year-old said, “After my initial academy days, I was picked by the Sports Authority of India (SAI). I also captained the Kerala U-19 team and attended an U-19 national team camp. After that, I got selected for Air Force and played for them for four years. For the past six years, they have released me to play professional football for clubs in the ISL and the I-League.”

For now, Shibinraj’s only focus is to help Gokulam Kerala lift the I-League trophy for an unprecedented third straight season. “I am currently aiming for a consistent performance. We need to win the I-League this year and complete the hat-trick,” he concluded.