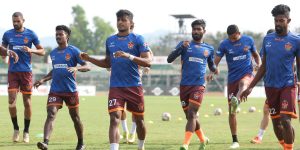 Two teams on same number of points after same number of matches, set apart only by goal difference – that is the story of Gokulam Kerala FC and Real Kashmir FC as they lock horns in the 2022-23 I-League at the EMS Corporation Stadium in Kozhikode on Friday, January 20 at 4:30pm IST.

The matches after the winter break have produced a lot of goals and teams have been moving up and down the ladder at a brisk pace. The Snow Leopards are in the fourth position right now, just ahead of the hosts. But the winner on the morrow will go up to the third spot, within four points of league leaders Sreenidi Deccan FC. Therefore, a lot is at stake.

There is not much to choose between the two teams even in terms of form. Gokulam Kerala FC’s stop-start season has continued in the New Year, with a 1-0 victory over Churchill Brothers followed by a 1-2 loss to TRAU FC in their last match in Manjeri on Sunday. On the other hand, Real Kashmir have started the year with two draws against Aizawl FC and Sudeva Delhi FC respectively.

Real Kashmir FC head coach Mehrajuddin Wadoo is fully aware of the importance this match holds for his team. “If you see the table, there’s not much difference between the teams. To stay among the top 4-5 teams, it’s imperative that we win tomorrow,” he said.

Wadoo also admitted the dip in form is a cause for concern. “Our form has really gone down. Injuries and suspensions have played their part in that, but I don’t want to give any excuses. I’m particularly not happy with the draws in the last two games. Tomorrow is the day where we should start the turnaround.”

Mehrajuddin Wadoo’s eagerness is not lost on his counterpart Francesc Bonet, who is expecting a tough match. However, the fact that they are back in Kozhikode after a gap of almost three years is a comforting factor. “We’re excited to play in this stadium again in front of our fans. That will surely be an advantage for us,” he remarked.

Talking about his opponents, the Gokulam Kerala FC coach said, “Real Kashmir are a side against whom you have to stay alert throughout the match. That is why they are still in the running for the top spot. This season, even teams in the bottom half are troubling the top teams, and this is an encounter between two top sides.”

The Malabarians’ defence has looked unsteady in the last two matches, and Real Kashmir FC have dangerous attackers like Ibrahim Nurudeen and Wadudu Yakubu, but Bonet is not too worried about it and will not try to go defensive. “I’m not too worried about defence because my style is to have as much possession as possible. If we do that, we can win. I don’t like to drop everyone back. I think the players we have are more comfortable playing the way we are,” he explained. The availability of Aminou Bouba, who missed the last match due to suspension, has obviously added to Bonet’s confidence.

What should be music to Gokulam Kerala FC fans’ ears is Bonet’s utterance that the team can still defend their I-League title. “I’ve said this before that I won’t come for practice unless I believe we can win the league. We have the best squad in the league with the new signings coming in. While deciding the first eleven, I always have problem of plenty,” he claimed.