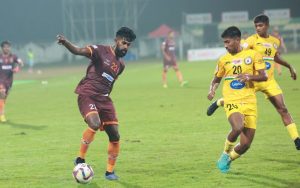 Gokulam Kerala FC registered a 3-0 win against Sudeva Delhi FC in their I-League 2022-23 sixth-round clash at the Payyanad Stadium in Manjeri on Wednesday, December 7.

Dodi Ndo’s second-half strike, followed by a Shijin T brace gave the defending champions their first win in four matches, taking them to third place on the standings. However, for the visitors, the result means a fifth straight loss as they remain rooted to the bottom of the points table.

The first half was a tense affair, with the action limited mostly to the middle of the pitch and scoring chances only a few and far between.

Three minutes into the match, Boum Somlaga thought he had given Gokulam Kerala the lead as he bundled a cross from the right flank into the net. However, it did not count as the referee had stopped play for an infringement in the build-up.

In the eighth minute, Sudeva Delhi FC had their best chance of the half through Akbar Khan. The midfielder fired in a direct effort from a long-range free-kick but it was collected by the home side’s goalkeeper.

From there on, it was Gokulam Kerala that did most of the attacking as they dominated possession but could not find the finishing touch in front of goal as the score was goalless at the break. They came closest to scoring in the 38th minute after Sreekuttan VS’s shot was spilled by Kabir Kohli in the Sudeva Delhi FC goal, but the keeper managed to avert the danger on the rebound.

The visitors had the first major chance just a minute after the restart as Shubho Paul played Francis Uchenna through on goal with an excellent pass but the Nigerian’s shot was saved deftly by Shibinraj Kunniyil in goal.

Gokulam Kerala resumed their control of proceedings and finally got the reward in the 53rd minute as they took the lead. Dodi, on as a substitute, found the net as he received a throw-in inside the penalty area, spun his defender, and fired his shot past Kohli.

Sudeva Delhi FC, however, came back fighting and had two glorious opportunities to score the leveller in the next three minutes. Misawa Tetsuaki’s shot from distance went just wide of the target and Paul, who found himself in a shooting position just 10 yards from goal, blazed his effort over the bar.

The away side had to pay the price for their missed chances as Shijin extended the Malabarians’ lead at the hour mark. After a dazzling run on the right flank, substitute Noufal PN floated in a teasing cross at the far post, which was duly nodded in by an unmarked Shijin.

In the 70th minute, the forward added another goal to his tally and his team’s advantage. On a counterattack, the tireless Sreekuttan played in Shijin with an inch-perfect through-pass and he slotted it through the keeper’s legs and into the net.

Gokulam Kerala continued to dominate proceedings right till the end of the match, coming close to scoring on a couple of occasions and also keeping their clean sheet intact. At the final whistle, the final score read 3-0 in favour of the hosts.