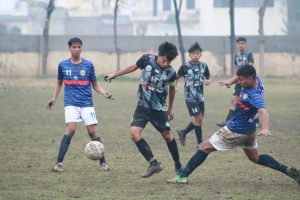 After a 3-0 drubbing of Shergill Soccer Academy in the first match, Minerva Academy got ready to take on SSBSFA in their second game of the 3rd JCT Punjab U-17 League.

Right from the off, Minerva Academy took control of the game, and just like the last game, they struck early, and from the same source.

Gwgwmsar, who got a brace in the first game, received the ball on the edge of the D after some good passing down the left. The striker needed just one touch to open his body, and another to side-foot the ball into the right corner. Perfect start for Minerva Academy again as they took the lead in the 2nd minute.

Minerva Academy dominated the half thereafter, but weren’t able to get their second and it remained 1-0 in favour for them at half-time.

The second goal came on the 75th-minute mark, and this time it was pretty direct. Minerva Academy took advantage of the opposition’s high-line as Charles launched a ball forward, and it was then fed into the path of Gwgwmsar, who struck it underneath the goalkeeper to get his and Minerva Academy’s second.

Minerva Academy put the ball in the back of the net again a few minutes later, but it was flagged offside.

With the points in the bag, Minerva Academy continued to push forward and play their natural, passing game. Another good move that started with a throw-in on the left, led to a string of neat passes, and eventually resulted in a penalty for Minerva Academy after a late lunge by the defender just as the striker was about to pull the trigger.

Gwgwmsar stepped up to take it and put it away to the goalkeeper’s right to complete his hattrick.

Another three goals, another three points for Minerva Academy FC, who march on in the 3rd JCT Punjab U-17 League with two successive wins. Gwgwmsar has now scored five goals in two games, and is the leading contender for being the top-scorer in the tournament.