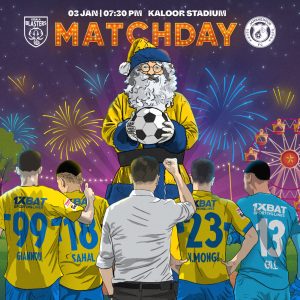 Kerala Blasters will take on Jamshedpur FC in their first match of the year 2023 at Jawaharlal Nehru Stadium, Kochi. Both the teams will be eyeing for a win to mark the start of a new year.

In the preceding game against Odisha FC, Kerala Blasters scored a late goal through Sandeep Singh to clinch all three points and ended the year on a high note. They will be looking forward to continuing the same momentum against Jamshedpur FC, while the Men of Steel held FC Goa to a 2-2 draw in their last game and will be aiming to go a level up to grab a win against the men in yellow.

In their last meeting, Kerala Blasters won the game for 1-0 courtesy to Diamantakos’ close-range shot from a Luna freekick. Kerala Blasters is currently at fouth position in the table with 22 points from 11 games and Men of Steel is in the 10th position with only one win in their 11 games.

Sandeep Singh scored the only goal against Odisha FC on boxing day to help the men in yellow to win their last game of the year 2022. Apart from that goal, he also did a splendid job at the defense-line and earned the well deserved Hero of the Match award.

Nihal Sudheesh, the local lad who came in as a substitute in the second half, set the fire on the right flank within a few minutes. He almost got his first ISL goal on a couple of occasions, but narrowly missed it. He was crucial in the second half performance of Kerala Blasters against the Juggernauts.

Bryce Miranda, yet another player who came in the second half against Odisha FC registered his first ever Hero ISL assist to his name. His crosses always created threat in the Odisha FC box and at one instance it caught their custodian and the back line off guard and Sandeep acted at time to nod it home.

The live streaming will be available on Disney+ Hotstar, Jio TV, Star Sports network and Asianet Plus from 7.30pm onwards.