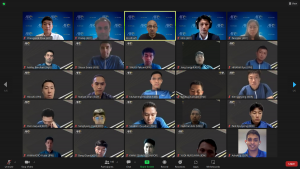 The first two days of the online seminar were attended by male match officials whereas the participants on the third and fourth days were exclusively women officials.

On all four days, the attendees were divided into two groups, one comprising the West and Central zones while the other included referees from the ASEAN, East and South zones.

With a total of 327 men and 81 women referees and assistant referees attending the sessions, the first day of the seminar, for both men and women officials, was split into two halves. The day began with a brief introduction from the instructors which was followed by a performance review of 2021 and 2022.

In the second half of the meet, the seminar explored several refereeing topics that had been identified based on analysis of Key Match Incidents from competitions held in 2021 and 2022. Topics that were covered during the course of the seminar included penalty area incidents and severity of offences.

Day 2 of the programme continued to delve into other refereeing areas such as offside ruling and match management. A brief session of feedback collection was also organised, after which the programme drew to an end.

The seminar was conducted by some of the most experienced and renowned instructors of the sport including Saudi Arabia’s Ali Al Traifi and Subkhiddin Mohd Salleh from Malaysia, alongside Widiya Habibah Binti Shamsuri also from Malaysia, Farkhard Abdullaev from Uzbekistan, John Chia from Singapore, as well as Japan’s Sachiko Yamagishi who was recognised as AFC Women’s Referee of the Year on five occasions between 2008 and 2013.