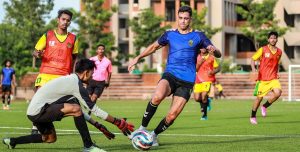 Continuing the preparations ahead of their Durand Cup campaign, Hyderabad FC beat select Hyderabad XI 8-0 in a pre-season friendly at The Gaudium School on Wednesday.

Manolo Marquez named two different sides for each half of the game, as every player in the squad added more valuable minutes under their belt before the season kicks off in Imphal.

Aaren D’Silva, Borja Herrera, Lalchungnunga Chhangte and Halicharan Narzary scored in the first half with the likes of Nikhil Poojary, Sweden Fernandes and Hitesh Sharma were at their fluid best, creating chances aplenty.

Chinglensana Konsham and Alex Saji looked solid at the back while Lalbiakhlua Jongte had answers to most questions posed by Hyderabad XI before the break.

Bartholomew Ogbeche scored with practically his first touch of the game and the pre-season while Javi Siverio and Mohammad Yasir also converted their chances with confidence.

Hyderabad FC finished a testing game with a victory, as they head to Imphal later this week, ahead of their Durand Cup opener against TRAU FC on August 22.