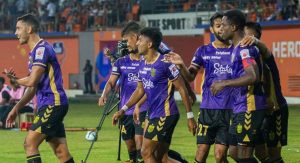 Hyderabad FC put on a resilient performance at the Pandit Jawaharlal Nehru Stadium in Goa today as they beat FC Goa 3-1 on a tricky Thursday night Indian Super League encounter.

Bartholomew Ogbeche (20′,79′,90′) scored the fourth hattrick of his ISL career while Redeem Tlang (54′) found an equalizer for the hosts, which was eventually in vain.

Hyderabad FC made it five wins on the bounce, as they moved back to the top of the league table with 31 points from their 13 games.

The hosts started the game on the front foot, pushing Hyderabad FC back with a couple of smart moves but it was Bart Ogbeche, who drew first blood.

Halicharan Narzary floated in a superb cross, and Bart was there to thump it in to give Hyderabad FC an early lead. The Gaurs had a couple of half chances before the break and it was all still in the balance, when both sides came out for the second half.

Redeem managed to convert after a spell of pressure from Goa and the goal made the game very interesting. But Hyderabad were never fazed, and managed to claw their way back into the game, after denying the Gaurs quite a few half-chances.

The ball dropped to Ogbeche after a good build-up from Hyderabad and the Nigerian striker was never going to miss from there as Hyderabad FC took back their lead with ten minutes to spare.

Alvaro Vasquez’s introduction made it tougher for the Hyderabad FC backline but the likes of Nim Dorjee Tamang, Odei Onaindia, Nikhil Poojary and Akash Mishra gave it their all before Ogbeche completed his hat-trick.

This time, it was substitute Abdul Rabeeh, who looked like he was enjoying the space FC Goa were affording him down the flank. Rabeeh made the most of the half-chance he created to put in a cross and it was Ogbeche running on to it.

It was his fourth hattrick as he moves to second in the race for the Golden Boot with six league goals. Borja Herrera, Joel Chianese, Hitesh Sharma, Javi Siverio, and Sahil Tavora all played their roles well and Hyderabad managed to register all three points and complete a double over the Gaurs for the first time in their history.

Hyderabad FC are back in action when they take on Chennaiyin FC at the Gachibowli Stadium in Hyderabad on Thursday, January 12.