Hyderabad FC up against FC Goa in must-win game! 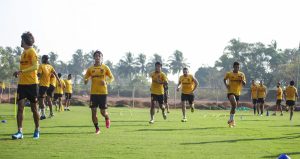 In what will be the last league game for both teams, Hyderabad FC take on FC Goa in a must-win clash on Sunday, February 28 at the Jawaharlal Nehru Stadium in Fatorda. With NorthEast United FC claiming the third play-off spot, the 5pm kick-off on Sunday will be a decisive game for both sides, as they look to claim the last remaining play-off berth.

Manolo Marquez’s side are currently in fifth, two points off Goa in fourth and need all three points from this Round 20 clash, to move into the knockout stages of the competition. However, Juan Ferrando’s men, who remain the last side to beat Hyderabad FC late in December, need to avoid a defeat to take the next step.

“In football, there are only three possible outcomes to a game. In two of these results, Goa qualify, so yes, we are under a small disadvantage. But I believe that at the end of the season, only the teams that deserve will qualify for the play-offs, and we need to show everyone that we deserve our spot,” said Manolo, speaking about the game ahead.

Ferrando’s side are currently on a record 12-game unbeaten streak and are fresh from back-to-back wins against Odisha FC and Bengaluru FC. Igor Angulo, who has 13 goals to his name this season, is the second highest goalscorer in the league while Jorge Ortiz is in fine form and will also be a danger man.

The likes of Alberto Noguera, Ivan Gonzalez, Glan Martins, Edu Bedia (back from suspension) and James Donachie have been consistent all throughout the season and could win the game for their side on the night.

FC Goa have taken more shots than any other team in the league and only Mumbai City FC have scored more goals than the Gaurs, which makes this a tough game for Hyderabad FC.

However, the Hyderabad FC Head Coach believes that this is not going to be an easy game for either side, with the pressure of qualification surrounding the tie. “This is surely a difficult game for both sides. Both teams are unbeaten for over 10 games now and this is more or less a knockout game, for a place in the playoffs,” he said.

Manolo Marquez will be confident of his side’s chances in this game, after a hard-fought draw against ATK Mohun Bagan recently, where his side were down to 10 men just four minutes into the game.

Chinglensana, who was sent off, will miss this game alongside Aridane Santana, who picked up his fourth yellow card on that night as well. Along with the duo, Asish Rai, who picked up an injury against the Blasters, will also be out.

Anything less than a win will put an end to an impressive season for Hyderabad FC. FC Goa will be happy with a point but will not settle for it, as they have a point to prove, going into the playoffs.

“The mood in our camp is quite positive. Of course, anything can happen in this game but I think it is not right to use the word ‘failure’ for the team that does not make it to the playoffs. It is good that we are fighting till the last game for qualification and we will do our best to go all the way,” Manolo added.

The game kicks-off at 5pm IST, on Sunday and will be telecasted live on the Star Sports Network with live streaming on Disney+ Hotstar and JioTV.