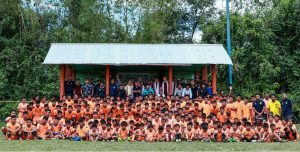 Ahead of their Durand Cup opening game, the reigning Indian Super League champions Hyderabad FC paid a special visit to the TYDA Football Academy in Toubul in the Bishnupur District of Manipur to have a special meet-and-greet session with the Academy’s aspiring footballers.

Hyderabad FC head coach Manolo Marquez was accompanied by forward Joel Chianese, defender Nim Dorjee Tamang and India international Akash Mishra as they interacted with over 150 kids and their parents at the TYDA ground in Toubul.

Coach Manolo delivered an inspiring speech to the budding footballers encouraging them to play the sport with passion while also focusing on their education.

The youngsters will be in the stands cheering on for Hyderabad FC in their Durand Cup games at the Khuman Lampak Stadium, including their Manipuri footballers Mohammad Yasir and Chinglensana Konsham who will be playing their first-ever competitive game in their home state.

Dr. Birbal Singh, Technical Director, TYDA Academy said, “It was a great day for all of us at the TYDA Academy, as the ISL Champions Hyderabad FC paid visit to our academy to meet all the aspiring footballers. Manipur has provided a lot of footballers to teams across India as well as the National team and we hope that with the support of HFC we can do a lot more. We are excited for the Durand Cup matches happening for the first time in Imphal and we will be cheering for Hyderabad FC with all our hearts.”