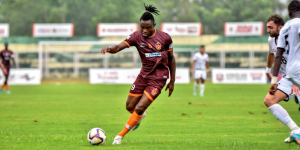 Defending champions Gokulam Kerala FC started the new season from where they left off last time. In the I-League opener at the Payyanad Stadium in Manjeri, the home side made the perfect start, beating Mohammedan Sporting Club by a solitary goal to pick up all three points. Last season, Gokulam Kerala defeated Mohammedan Sporting in the concluding and deciding encounter to bag their second straight title.

Mohammedan Sporting started the game on a high tempo, with several new signings like Nuriddin Davronov, Abhishek Ambekar and Abiola Dauda in their starting XI. Soon, Gokulam Kerala also grew into the game and it became an end-to-end affair. In the 11th minute, Gokulam Kerala’s Farshad Noor and Nuriddin Davronov of Mohammedan Sporting were booked by the referee after an argument.

The first half did not see many clear opportunities for either side. Aminou Bouba went close for Gokulam Kerala in the 35th minute but his free-kick went just over the bar.

Gokulam Kerala stepped up their game and began the second half with more urgency. Rahul Raju and Christy Davis of the home and away teams, respectively, received yellow cards at the start of the second half.

The Malabarians then broke the deadlock in the 55th minute. New forward signing Auguste Somlaga played a quick give-and-go with midfielder Farshad Noor before driving a low shot from outside the box. His effort slipped through the hands of Mohammedan Sporting keeper Zothanmawia and the ball crossed the goal-line.

After going into arrears, Mohammedan Sporting Coach Andrey Chernyshov made a tactical change as he brought on midfielder Faslu Rahman for striker Dauda in the 62nd minute. The Black and White Brigade had a decent chance to equalize in the 64th minute as Vanlalzuidika raided the Gokulam Kerala penalty area but the attack didn’t amount to anything. On the other side, Farshad Noor entered the Mohammedan Sporting box after some great dribbling but his effort narrowly missed the target.

Midway through the second half, the game turned into a midfield tussle. Mohammedan Sporting seemed like running out of ideas and failed to pose any real threat to the Gokulam defence. In the 83rd minute, their skipper Sheikh Faiaz received a good chance in the Gokulam box but his shot went straight to the Gokulam Kerala goalkeeper Shibinraj Kunniyil, who dealt with it easily.

The fans attended the first I-League match in over two years and it was great to see them back in the stands. The Malabarians clearly had an edge in the game and received the backing of the vociferous crowd throughout the match.

Gokulam Kerala FC will now face Aizawl FC in an away fixture on November 18 at the Rajiv Gandhi Stadium, while Mohammedan Sporting travel to play RoundGlass Punjab FC on November 20 in Panchkula.