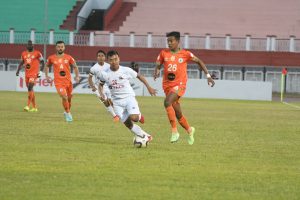 NEROCA FC registered their second consecutive win in the I-League 2022-23 when they defeated Aizawl FC 2-1 at the Khuman Lampak Stadium on Saturday, January 21.

In a game in which all actions unfolded in the second half, the visitors, Aizawl FC, took the lead early in the second half through a well-executed free kick taken by R Lalthanmawia. However, the hosts came out strong and scored two goals in a span of six minutes. While Mirjalol Kosimov volleyed in the equaliser, a scintillating strike from Jourdaine Fletcher fetched NEROCA FC full points.