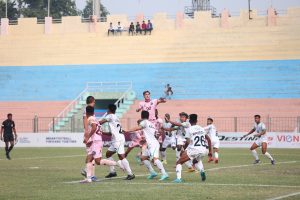 Rajasthan United FC began their home campaign on a positive note with a 1-0 win against NEROCA FC in a fifth-round fixture of the I-League 2022-23 at the Ambedkar Stadium in Delhi on Saturday, December 3.

A first-half header by Kyrgyz defender Aidar Mambetaliev was enough for the hosts to collect three points as they remained unbeaten for the third straight game.