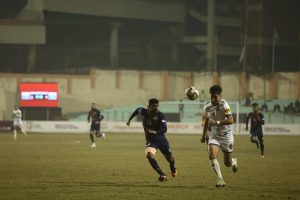 A winter Wednesday evening could not have got hotter at Ambedkar Stadium as Sreenidi Deccan FC thought they had salvaged a point through David Castaneda’s tenth goal in this I-League season in the dying moments of the match, only to see it disallowed for offside. A few minutes of furious protest notwithstanding, the match ended 1-0 for Rajasthan United FC.

It was fitting end to a tie that sometimes saw end-to-end action and was settled by a lucky strike from Rajasthan’s Kyrgyz defender Aidar Mambetaliev. He was correctly declared the Hero of the Match having stood like a rock in defence as well.

@Arunfoot
Previous CAF and LOC give African Nations Championship state of readiness the thumbs up!
Next Jamshedpur FC head to Kolkata for their reverse fixture against East Bengal FC!