Jamshedpur FC head to Kolkata for their reverse fixture against East Bengal FC! 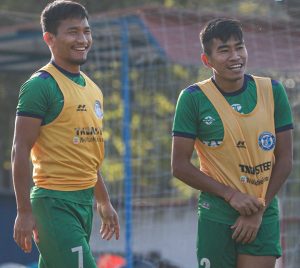 “Our goal is to finish as high up as we can and try and make ground on those immediately above us” said the Jamshedpur FC Boss Aidy Boothroyd ahead of their upcoming fixture against East Bengal FC.

Another night at the Men of Steel’s turf ended in a stalemate as the hosts went toe-to-toe with the two-times ISL champions Chennaiyin FC. Jamshedpur FC’s 2-0 lead created by the forward with multiple tricks up his sleeve, Ritwik Das was equalised by the Marina Machans in the second period of the game. Despite multiple opportunities created by the Jamshedpur FC attacking side to take the lead, the game wrapped up with both sides sharing the points at the end of the night.

Now the Jamshedpur FC squad head to Kolkata to play the reverse fixture against the Torch Bearers in their next ISL game at the Saltlake Stadium.

The two clubs have shared the pitch with each other for a total of five times out of which two have ended in East Bengal’s favour and one with no clear winner.

In their previous meeting, the Red and Gold Brigade took a two-goal lead in the first half to which the Men of Steel replied with a goal before heading into the break. The second half saw the Men of Steel putting the work in to get back in the game by scoring an equaliser. But the visitors, East Bengal FC extended their lead further and sealed the winning points all to themselves in a cold night at the Furnace.

On the upcoming away clash against the Kolkata-based club, Jamshedpur FC’s Gaffer, Aidy Boothroyd opined,“Our goal is to finish as high up as we can and try and make ground on those immediately above us.”

A glance at the league table shows Jamshedpur FC currently positioned at the 10th place with six points. On the other hand, East Bengal FC is just one position above Jamshedpur with 12 points on the board. While the Men of Steel shared the spoils in their previous game, the Torch Bearers suffered a loss against Odisha FC in their last fixture.

With the end of the league stage of the 2022-23 season barely a month away, both squads will do their best to acquire as many points as possible from the remaining matches and keep their hopes to make it in the top 6 alive. This game will be an important clash in their fight to climb up the table and both sides will leave no stone unturned to walk out victorious out of this anticipated clash at the Mecca of Indian Football. With the Red and Gold Brigade playing their first home game of the new year, they will seek to produce a win for their home fans while the Men of Steel will aim to register their first win away from home.

Watch Jamshedpur FC play against East Bengal FC at the Saltlake Stadium in Kolkata on the 13th of January, 2023 at 7:30pm.