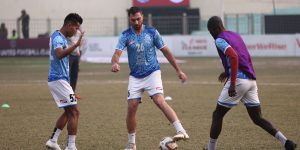 Mohammedan Sporting Club are set to play their first home game under new head coach Kibu Vicuna as they welcome Aizawl FC at the Kishore Bharati Krirangan in Kolkata on Friday, January 13 at 4:30pm IST.

Mohammedan Sporting are languishing in the ninth spot in Hero I-League standings right now, but they are yet to lose at home. Therefore Aizawl FC, coming off a goalless draw against Real Kashmir and yet to win on the road this season, will have an uphill task in Kolkata.

After ten matches each, these two teams are separated by just one point. Neither can make a huge progress with tomorrow’s win, but Mohammedan Sporting’s Kibu Vicuna thinks it would be a small step in the right direction. “There is still time to win the league because there are 12 matches left, meaning 36 points to be had,” he said on Thursday. However, he does not want to think too much ahead. “You can’t get those 36 points tomorrow itself,” he explained. “We’ll take one game at a time. I think we can draw hope from the fact that we played well against a good side like Rajasthan United, who defeated the league leaders.”

It is true that the Black and White Brigade matched Rajasthan in every aspect of the game in the last encounter. They even went ahead late into the game but could not hold onto that lead. That has been a recurring problem for Vicuna’s side this season and it has prevented them from moving up the table despite not-so-bad performances. Vicuna hopes problems like these will be solved with reinforcements. “Some new players are here to give the team a new dimension,” he remarked. “We have to focus on our own game and improve on set pieces particularly.”

It was clear that the Spaniard is hoping to win tomorrow and gain some much-needed momentum. At the same time, the experienced coach is aware of the dangers Aizawl FC pose. “Aizawl FC are a good team, especially because of players like Henry Kisekka. There are also good Indian players who will play for bigger teams in future, even in the Indian Super Leauge, said Vicuna.

Goalkeeper Zothanmawia, who came for the press conference with the coach, sounded even more hopeful when he said, “We respect Aizawl FC but if we play to our potential tomorrow, we can get full points.”

Vicuna’s counterpart Caetano Pinho was more guarded in his approach. He refused to set any particular target for tomorrow’s match and only said, “I’m looking for a good fight. Let’s hope for the best.” The coach was pinpointed in his articulation of what needs to be done. Like Vicuna, he too, marked Kisekka as an important cog in the wheel. “We need to improve our finishing in attacking third. If Henry can do the trick for us tomorrow, it will be a positive result for us.”

Even though the Ugandan forward looked rusty against Real Kashmir, it is his experience of playing in Kolkata that makes him a crucial character. He played for Mohammedan Sporting only last season. Pinho would naturally hope he can pull something out of his hat to surprise his former club on the morrow. Kisekka did say “Kolkata is like my home, so good to be back here. My experience of playing in Kolkata has helped me understand Indian football better.”

If men like Tharpuia and Mafela play as well as they did in the last match, Vicuna’s boys could have a tough time.