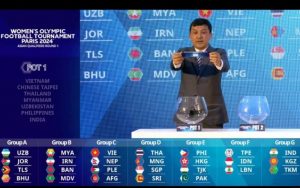 India have been drawn alongside Kyrgyz Republic and Turkmenistan in Group G of the Women’s Olympic Football Tournament 2024 Asian Qualifiers Round 1. The draw was held at the AFC House in Kuala Lumpur, Malaysia on Thursday on January 12, 2023.

Twenty-six teams are divided into five groups of four and two groups of three, with matches to be played in a one-round league format in a centralised venue from April 3 to 11, 2023.

The seven group winners will advance to Round 2 where they will be joined by the five highest-seeded teams – North Korea, Japan, Australia, China and South Korea.

Four teams from Round 2 – the three group winners and the best-ranked runners-up – will then face off in Round 3 where they will play two pairs of home and away matches with the eventual winners qualifying for the Paris 2024 Women’s Olympic Football Tournament.

The hosts for the groups and the match schedule will be announced in due course by AFC.