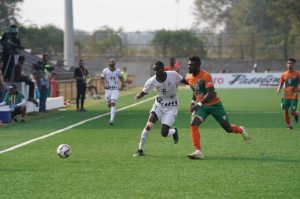 Sreenidi Deccan FC registered a memorable 4-3 comeback victory against Mohammedan Sporting Club in their I-League 2022-23 match at the Deccan Arena in Hyderabad on Thursday, December 1.

In a thrilling edge-of-the-seat encounter, Mohammedan Sporting raced into a two-goal lead through Nikola Stojanovic and Faslurahman Methukayil, but Faysal Shayesteh’s free-kick ensured that the hosts trailed by one goal at the break. The visitors extended their advantage through Sheikh Faiaz but a blitzkrieg of goals by Sreenidi Deccan FC late in the second half — a volley by Awal Mohammed and a brace of headers by substitute David Castaneda — completed the turnaround.

The result takes Carlos Vaz Pinto’s team to their fourth win on the trot and will infuse further confidence in the squad. On the other hand, for Mohammedan Sporting, the result will certainly be a bitter pill to swallow as they suffer their third loss of the season and snap a two-game winning streak.