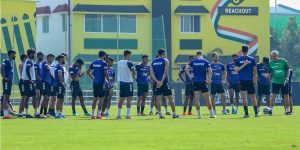 After a strong start to the 2022-23 Indian Super League campaign, Manolo Marquez’s Hyderabad FC have now failed to collect a point from their last two league games. But they will look to bounce back when they take on Chennaiyin FC at the Jawaharlal Nehru Stadium in Chennai, in a 5:30pm kick-off this Saturday.

The ISL defending Champions, find themselves 2nd in the league table going into this game, five points adrift of Mumbai City at the top. The Marina Machans on the other hand, are seventh and could move up to fifth with a positive result in this tie.

Thomas Brdarić’s team has proven to be one of the most unpredictable sides in the competition this season, winning two of their last four league games. They are fresh from an unlucky defeat to Odisha FC and will look to turn things around in this game.

Speaking to the media, Hyderabad FC head coach Manolo Marquez was all praises for the opponents. “Chennaiyin FC have very good offensive players. They are sometimes unpredictable but I like the team. They are a brave team, who play to win,” he said.

“They have players with a lot of experience in the ISL. The foreigners are all new but they are playing in front of their fans and I think it will be a difficult game for us,” the Spaniard added.

Abdenasser El Khayati has been impeccable in front of goal while the likes of Petar Sliskovic, Vincy Barretto, Kwame Karikari, Rahim Ali and Vafa Hakhamaneshi have all had the taste of scoring this season.

Debjit Majumder, Julius Düker and Fallou Diagne have all been in fine form as well, and could prove to be a tough test for Hyderabad FC in this game.

On the other hand, Manolo Marquez’s side have found goals hard to come by, having failed to find the back of the net in each of the last two games. Bartholomew Ogbeche, Mohmmad Yasir, Joao Victor and Halicharan Narzary have all netted twice this season but have not been in great form recently.

But the performance of Gurmeet Singh on goal, well supported by a settled backline still remains the strength of the side. Hyderabad FC have only conceded five goals all campaign and will hope to keep the CFC attackers quiet in what promises to be an entertaining evening in Chennai.

Hyderabad FC Head Coach Manolo, however, is positive about his side’s chances in this game. “We have very clever players, who have a lot of experience in this league. We have trained quite well and are ready for what will be a difficult game for both sides,” said the Spaniard.

Hyderabad FC beat Chennaiyin FC in the group stage of the recent Durand Cup campaign in Imphal but Manolo expects this game to be a close contest and a treat for the fans.

The game kicks off at 5:30pm IST on Saturday and will be telecasted live on the Star Sports Network with live streaming on Disney+ Hotstar and JioTV.

Previous I-League VIDEO: Sreenidi Deccan FC 4-3 Mohammedan Sporting – Match Highlights!
Next Starting in 2023 LaLiga will give fans the opportunity to own all goal-scoring balls!