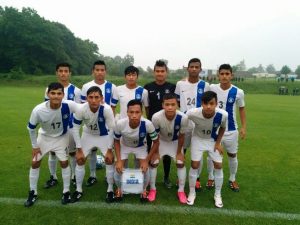 The India Under-16 boys preparing for the 2017 FIFA Under-17 World Cup lost by a solitary goal against the Luxembourg Under-16 National Team in an exposure match at the Sports School Bitburg ground in Germany this evening.

Luxembourg scored the only goal of the match in the 13th minute and that proved enough for them to seal the win. However, it was the Indian colts who initiated an attack early on, when in the 7th minute, Boris ran down the flank, buzzed inside and shot with venom at the goal, only to earn a fine save from the opposition custodian.

Seven minutes later, India had a chance to equalize but were left reeling as Suresh failed to tap the ball home, after Boris breezed past two defenders and cut the ball back for an onrushing Suresh.

India were unable to apply the finishing touch to their fostered goal scoring opportunities and even in the second half, despite dominating possession and the tempo of the match, the Indian Colts failed to find the net as the full-time scoreline read 1-0 in Luxembourg’s favour.

Coach Nicolai Adam and his boys will surely be working on finishing off chances in the coming days.

The Indian U-17 World Cup Squad faces the Under-16 National Team of Luxembourg again on June 8, but this time in Luxembourg.