India coach Constantine: Kept our head up and fought for every inch!

Arunava Chaudhuri 2016-06-07 Asia, Team India Comments Off on India coach Constantine: Kept our head up and fought for every inch! 1,632 Views 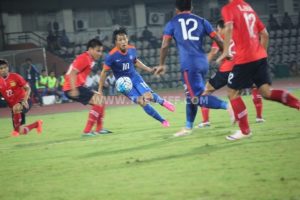 It is not every-day that a Football scoreline resembles one that of Tennis. On June 7, 2016 it was different, as India thumped Laos side 6-1 in the second leg of the 2019 AFC Asian Cup Playoff Qualifiers.

In the Official Post Match Press Conference, Head Coach of the Indian National Team, Stephen Constantine applauded the character showed by his boys, even after conceding an early goal.

“The order in which we won the match says a great deal about our character. We kept our heads high and fought for every inch. I am happy that Laos scored early on in the match as it gave us time to recover and stage a comeback.”

“We got the result that we wanted and the goal difference over the course of two legs will certainly help us in the FIFA Rankings”, Constantine added.

“Jackichand Singh changed the game for us as he had a positive effect from the time he was introduced.”

“My objective was to get us to the qualifiers of the 2019 AFC Asian Cup and that I have done that”, Constantine quipped.

The British Coach also explained that, “there is always an intent to win whether it is Iran or Laos.”

“There is always an intent to attack and score first, but the way we started the game I did not expect to win by 5 goals.”

Constantine also showered praise on Jeje Lalpekhlua, who was sitting besides him and said, “He (Jeje) is a complete striker, he works hard, he holds the ball and he knows what he is doing.”

“I am really pleased with his performance and he has the potential to go and play outside of India in the European Leagues.”

The man of the moment, who scored two goals commented on his goal scoring form and said, “that it is hard work which enables me to find the net every time.”

“We stood united today, we attacked united and we played as a Team and that is how we won the game”, Jeje added.

Laos Head Coach Valakone Pomphakdy credited the Indian Team for their splendid performance earlier in the Official Post-Match Press Conference and said, “India were better than us physically and tactically. They deserved to win and the scoreline speaks for itself, we cannot compare the two sides as one (India) is far better than us.”