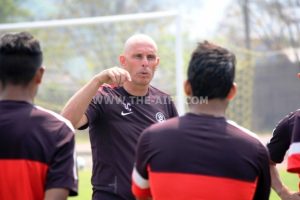 As the Indian National Team prepare for the forthcoming 2019 AFC Asian Cup Qualifier match against Laos, National Coach Stephen Constantine feels Indian Football would benefit hugely if the Clubs had an “access to Sports Science.” In a freewheeling interview to AIFF Media, Constantine speaks at length about the prime focus in the Camp, the fitness levels of the Footballers, use of Sports Science in modern Football, new faces in the Camp and much more.

How is it going in the Camp?

The boys are working hard. We have a few more days to prepare so we can afford not to rush.

What are you stressing on?

The lack of conditioning always needs to be addressed. As we now have more days we can at least do more work on physical part. That’s primarily the focus – testing the levels of fitness.

How do you rate the fitness levels of the boys?

Not all Indian Clubs have an access to a Sports Scientist. That makes the job of the Club Coaches all the more harder and it also makes it difficult for the Players. Most of the injuries which a Player sustains happen some 7-10 days after they have left the National Camp. It’s because they train at a much higher level with the National Team but when they go back to their Clubs the level drops. That’s when they are susceptible to injuries.

It will be hugely beneficial for Indian Football if the Clubs have access to Sports Science or at least a high level Fitness Coach.

Bengaluru FC are a good example. The boys are regular at the gym doing the extra bit, there is a Sports Science Coach and physically, they are in a better condition (than most others) when they report to the Camp. Things which we do at the National Camp do not surprise them.

There are quite many new faces in the Camp.

We didn’t have much choice. Off the 26 whom we selected, 11 are busy with their respective Clubs for the AFC Cup commitments. Hence, we decided to bring in some Players whom we have been tracking to see how they train and respond and understand their attitude.

The Players from Mohun Bagan would report to the Camp on the morning of the 25th (May 25) while Bengaluru FC Players would be assembling on the morning of the 28th (May 28). The Club had scheduled an Awards nite but they have been understandable enough and have advanced it by a day keeping in mind the National Team’s commitments. I need to thank them for that.