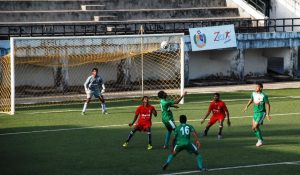 Churchill Brothers SC was able to hold back a charging Salgaocar FC to a 1-1 draw in yesterday’s Group A Bandodkar Gold Trophy fixture held at the Duler Stadium in Mapusa. Liston Colaco scored early for the Greens in the 3rd minute while Mathew Colaco restored parity in the 8th minute for Churchill Brothers.

The Salgaocar lads were quick to create trouble in the opposition’s box as Naro Shrestha, Jason Barbosa and Liston combined well to find the leaks in their defence. It didn’t take long for the Greens to get the first goal of the game. Liston’s opening scorcher was set up by Jason in the 3rd minute after the latter sent a cunning through ball to make things easy for his team-mate.

Recovering from the early shock the Churchill Brothers lads dug deep and began to create problems of their own for the Salgaocar defence. Manjunath Rathod would have cancelled Liston’s opener earlier if it had not been for custodian Rohan Sheikh’s diving save. Not to be denied Mathew outsmarted the Greens’ defence after he received Cyrus Noronha’s lob inside the box and placed well beyond the keeper’s reach.

Jason would have handed the Salgaocar outfit with a lead had it not been for a wonderful goal-line clearance from Jasper Pereira. As the game progressed most of the play was restricted to the midfield and either side’s fans cheered whenever it seemed an opportunity was presented. The Greens pushing hard to no avail remained in the 1-1 deadlock at half-time.

In the second-half neither side was able to do much trouble as a result of miss passes and shots which were wide off the target. Liston came close to score a brace as he stood over a free-kick on the edge of the box which the young Green sent just above the horizontal post. The game ended as Liston was named the man of the match.

Anthony Pereira, Salgaocar Juniors coach, said, “The team played well, they have given their best but the finishing was lacking. Overall the team played and performed well. There was no luck for us today.”

Liston Colaco of Salgaocar received the man of the match cash prize of Rs. 5,000 from the hands of Lavino Rebello, GFA’s vice-president.