India look to begin SAFF U-17 Championship on positive note against Bhutan! 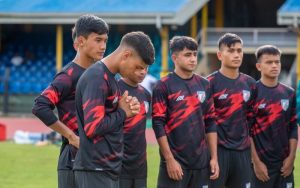 The India U-17 boys will be looking to kick start their SAFF U-17 Championship 2022 campaign on a positive note in Sri Lanka, as they face Bhutan in their first match at the Racecourse International Stadium in Colombo on Monday, September 5.

Speaking on the eve of the match, India head coach Bibiano Fernandes showed a lot of respect for India’s opponents in the first match, stating the importance of starting with a win.

“Bhutan are a good side, and we respect them a lot. Our previous batches have had some good moments against them, but this is a completely new batch, and we start from square one. So we will be looking to put our best foot forward tomorrow and start our campaign with a win,” said Fernandes at the pre-match press conference.

Bibiano, who has been the head coach of this age category (previously the U-16s), has helped his sides qualify for the AFC U-16 Championship (now known as the AFC U-17 Asian Cup) in the 2018 and 2020 editions. While the Blue Colts came within one step of qualifying for the U-17 FIFA World Cup when they made it to the quarterfinals in 2018, it will be a new challenge for the current batch.

“We are here obviously with the expectation to win the championship, as always, though we have come with a completely new set of players. The last two years have been a difficult time for everyone, as we could not get any international exposure due to the pandemic,” said Fernandes.

“However, that has been the case for everyone as well, and this comes with a new set of challenges. We know the likes of Nepal and Bhutan are good teams, so every match will be crucial for us. We will take it one game at a time.”

India have been clubbed in Group B alongside Bhutan and Nepal, and they get their campaign against the former at the Racecourse International Stadium on Monday, September 5 at 3.30pm IST. The match will be streamed live on the Eleven Sports platforms.