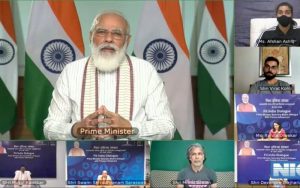 Indian Prime Minister Narendra Modi addressed the nation in a virtual meet with a number of top athletes and fitness influencers across the country, which also included women’s footballer Afshan Ashiq, at the Fit India Dialogue, on Thursday, September 24, 2020.

The Prime Minister praised Ashiq, stating that her exploits on the pitch will lead people to use a different term while referring to football.

“You have amazed us all in football. The fans often say ‘Bend it like Beckham’. They can now say, ‘Ace it like Afshan’. You have been an inspiration to the women not only in Kashmir, but also in the entire country,” said the Prime Minister.

PM Modi further went on to urge the people of India to take up at least 30 minutes of physical exercise every day, even stating that doing the same along with ones family strengthens the bond between family members.

“A family that plays together, stays together. Many families have shed sweat during the pandemic, exercising together. This physical exercise creates an emotional bonding between family members,” he stated.

Minister of Youth Affairs and Sports Kiren Rijiju expressed his joy that the people of the country have taken fitness seriously, and revealed that the government has issued different fitness protocols for people across different age groups to follow.

“The Fit India movement has taken the fitness of the country forward. We have launched the fitness protocols for three different age groups and we hope that this will help everyone keep fit,” Kiren Rijiju declared.

Ashiq, in turn, stressed on the importance of working on both physical and mental strength, especially for a goalkeeper like her.

“I have to not only work on my physicality and flexibility as a goalkeeper, but also on the mental side of the game. I can see the whole game unfolding in front of me, so as a goalkeeper, 60 per cent of how the game goes could depend on how I read the game,” she said.

“I take a lot of inspiration from MS Dhoni. The way he keeps calm in tense situations is incredible. That is why it is important to keep your mental stress in balance,” Ashiq added.