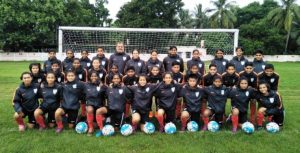 Nine girls from the Sub-Junior Girls National Championship 2018/19 champions Manipur, along with 26 other players have been called for the India U-15 Girls preparatory camp in Cuttack for the SAFF U-15 Women’s Championship which is slated to be held in Bhutan from August 9-18, 2018.

This will be the second edition of the SAFF U-15 Women’s Championship, the earlier one held in 2017 in Dhaka where the Indian girls finished runners-up to hosts Bangladesh.

“I am focussing to elevate their game before the tournament so that we can play our natural game. Everyone makes mistakes. We have even seen it in the World Cup too,” India U-15 Girls team coach Firmin D’Souza stated.

“The stress in on to teach the girls to learn from their mistakes which would only help them playing their natural game,” he added. “The fitness levels are good as I see it. We need to tune our on-field performance and get the structure right defensively.”

The India U-15 Girls play their first match against Sri Lanka U-15 at the Chalimithang Stadium in Thimpu on August 9.

“I always try to let them play freely and fearlessly. Let the pressure be on me and never on them. We missed the title narrowly last time but we’re heading to the Championship to show our brand of Football which would help us garner some positive results to finish with.”

“I have watched videos of the last edition and we are coming up with something new. We’ll try to execute them during the training sessions and eventually, on the pitch.”

India’s fixtures at the SAFF U-15 Women’s Championship are as follows: