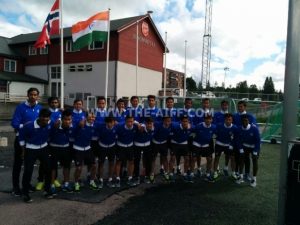 Coming on the back of a 3-0 win over Ullensaker U-16s, the Indian Colts were right off the blocks and dominated possession, whilst restricting the Norwegian Team to their own half.

The dangers bells rung for the Norwegian Team in the 9th minute when Sanjeev’s free-kick curled inches over the bar as India tried to take an early lead. Seven minutes later, the Colts capitalized on their attacking momentum and took the lead when Sanjeev tapped home a Hendry cross from the right flank to make the scoreline read 1-0.

At half-time the scoreline read 1-0 and the Indian colts picked-up right where they left off and in the 52nd minute Saurabh missed a sitter when he latched onto a Ninthoi through pass, steamed clear of the onrushing custodian, but failed to tap the ball home.

Not to be deterred, the Indian Colts doubled their lead a minute after as Aman Chhetri exquisitely curled the ball home to make it 2-0 in favour of India. In the 59th minute, the Indian colts drew curtains on the match as they took an unassailable three goal lead when Lalengmawia scored to make the scoreline read 3-0.

In the 80th minute Lalengmawia scored his second and India’s fourth and Joysana added more glitz to the scoreline as he scored in the 86th minute to make the scoreline read 5-0. Komal and Gaston added to India’s goalscoring tally in the dying embers of the match as the full-time scoreline read 7-0 in India’s favour.