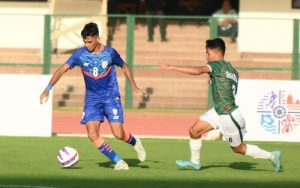 Defending champions India U-20 went down to Bangladesh U-20 1-2 in their first match of the SAFF U-20 Championship at the Kalinga Stadium in Bhubaneswar on Wednesday, July 27. Bangladesh striker Mohammed Piash Ahmed Nova scored a brace for the winners, while Gurkirat Singh netted one for India. All the three goals came in the first half.

Though India tried to seize the initiative early, Bangladesh proved smarter as they caught the Indian defence unaware with their quick counter-attacks and long balls played with intent behind the Indian defence.

They were unlucky to have hit the frame in the 11th minute. Striker Nova pounced on a long ball and lobbed it past an onrushing Indian goalkeeper Zahid Hussain only to agonisingly see it hit the post and bounce back.

Even as India tried to play short passes in their effort to build it up, the rivals were content playing it long, and it eventually paid them dividends in the 29th minute. Indian captain Bikash Yumnam failed to intercept and clear a long ball from the rival defence line. Much to his frustration he saw it falling to Nova who sidestepped Halen Nongtdu, and slotted home.

A minute later, Bangladesh should have doubled the lead but Moinul Islam, all in the clear of Nova’s curling centre from the right, headed wide.

The miss proved costly as India pulled it back 4 minutes later with Gurkirat Singh heading in India’s equaliser. Gurkirat delectably adjusted his balance and space in between the defenders to head home Vibin Mohanan’s cross.

However, more drama was in store as Bangladesh earned a penalty in added time of the first half, when the referee found Tankadhar Bag guilty for pulling Mohammed Nahian inside the box. Nova gleefully buried it from the spot as Bangladesh headed to the interval enjoying a 2-1 lead.

Changing over, India earned their first corner of the match in the 50th minute when Himanshu Jangra’s effort from the top of the 18-yard box deflected for a corner. However, it didn’t pay much dividends.

Trying to make amends, India earned a free-kick in the zone in the 55th minute when Shahidul Islam brought down Vibin. But Gurkirat’s effort sailed over. The first yellow card of the match was flashed at Pritam Meetei in the 65th minute for an offence on Shahidul.

Head Coach Shanmugam Venkatesh used all his substitutions by the 70th minute, and though the Indian boys played it amongst themselves, they couldn’t penetrate to break down a stubborn rival defence.

India’s last chance fell to substitute Taison Singh in added time when he trapped it at the edge of the box, went past a couple of defenders, but the defence recovered fast to deny him.

India next play Sri Lanka on August 29, the kick-off of which at the Kalinga Stadium in Bhubaneswar is at 4pm IST.