India U-20 under pressure against Sri Lanka in SAFF U-20 Championship! 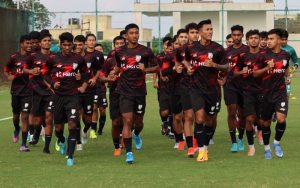 The India U-20 National Team will be looking to put their last defeat against Bangladesh behind them as they prepare for their next match against Sri Lanka in the SAFF U-20 Championship in Bhubaneswar on Friday, July 29.

Speaking on the eve of the Sri Lanka game, India U-20 head coach Shanmugam Venkatesh outlined the importance of all sticking together and getting the job done.

“Right now, we can’t afford to look back and lament about the Bangladesh game anymore. We need to look ahead to our match against Sri Lanka. If we are able to execute it on the field, we will be able to deal with their threat,” said Venkatesh.

“As a coaching staff, it’s very important for us to make sure that the boys stay motivated. We need to encourage them to play well,” he continued.

While India suffered a loss in their last game, Venkatesh had mentioned that the coaches will take stock of the errors and try to rectify them. “We made a few mistakes in our last game. But we do not blame any individual,” Venkatesh quipped. “We play as a team, win as a team, and lose as a team. Our defence starts with the attackers, and attack starts with the defenders, so everyone, including myself is responsible.”

“Of course, we will take a look at our last game and analyse the areas where we can improve and do better,” he said.

Sri Lanka have lost both their matches so far. While they had lost 0-1 to Bangladesh in their first match, they went down 0-3 to Nepal in their second.

India’s match against Sri Lanka in the SAFF U-20 Championship will kick off at the Kalinga Stadium in Bhubaneswar on Friday, July 29 at 4pm IST, and will be streamed live on SportzWorkz YouTube channel and on the Eleven Sports platforms.