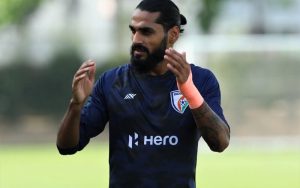 ATK Mohun Bagan have announced that India International defender Sandesh Jhingan has left the Mariners for a second time.

After two years with the Baichung Bhutia owned club, Sandesh moved on to Mumbai FC before being picked up by Kerala Blasters FC in the 2014 ISL draft. He spend six successful years with the Blasters with loan spells for Sporting Clube de Goa, DSK Shivajians FC and Bengaluru FC.

In 2020, Sandesh Jhingan moved to Kolkata for the first time by joining ATK Mohun Bagan, but left them last summer to try and fulfil his dream of playing in Europe. He moved to Croatian side HNK Sibenik, but due to injuries didn’t make any impact.

Sandesh then returned to the Mariners in the winter for the remainder of ISL-8 making nine appearance with an impressive 25 tackles, 14 interceptions, 30 clearances and 13 blocks to help stabilise the ATK Mohun Bagan defence and take them into the ISL semifinals.

Thank you Sandesh Jhingan for your time at the club and all the best for the future! 💚♥️#ATKMohunBagan #JoyMohunBagan #AmraSobujMaroon pic.twitter.com/jnRGPdRc5v

Now Sandesh Jhingan leaves the Mariners once more and it isn’t clear where he will now go as he has offers from archrivals East Bengal Club and more ISL clubs besides looking to try to give it another shot in Europe.

Sandesh Jhingan is considering initial offers from Sweden, Denmark and Norway. Nothing concrete yet. Three clubs in India have also shown interest and are in discussion. Don’t think he will be in any hurry to sign anywhere.#IndianFootball #Transfers