India U-20s Venkatesh: Always a learning process for the boys! 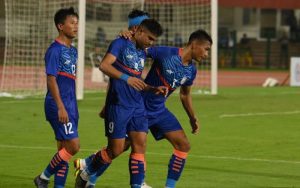 In football, as in life, all things move forward. Much in the same way, the boys in the India U-20 National Team have come through the ranks from the lower age groups to knocking on the doors of senior football over the years.

The India U-20s, currently participating in the SAFF U-20 Championship in Bhubaneswar, have made it to the final where they will take on Bangladesh on Friday, August 5 to decide the winner.

“These boys have come a long way. We took them under our wing in the Indian Arrows two seasons back. But most of them had already been in the U-15 or U-16 teams. So, it was a matter of helping them make the jump to this level,” said Head Coach Shanmugam Venkatesh.

“This is a stage where they are one step away from the senior level. In my books, they should treat themselves as senior International footballers right now, if they want to be successful.”

A number of players in the squad have already tasted some degree of success at the Asian level – something that might come in handy later on, as the same team is set to play in the AFC U-20 Asian Cup Qualifiers in about a month’s time.

“We have so many boys who have played against good Asian teams, and even beaten them at junior age-groups. At a certain level, football can also be all about confidence and faith in one’s own abilities. After defeating good Asian teams in lower age groups, those same boys will now be a bit more confident while facing such teams,” he said.

“The main reason we all play the age groups is to get these boys ready for the senior level. Hence, it’s always a learning process. Even throughout this tournament the boys have learnt so much,” he said. “In our first game against Bangladesh there were a few mistakes. But the boys have stayed focused, and have worked on them.”