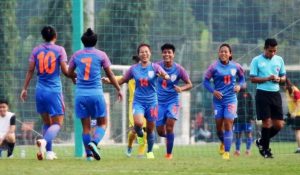 The Indian senior women’s national team has been announced for the upcoming South Asian Games 2019. The football women’s competition of the South Asian Games will take place from December 3-10 in Pokhara, Nepal.

The teams participating are India, Nepal, Sri Lanka and Maldives. India will open their campaign against Maldives on December 3.

The best and the second-best performers off the four nations will face off in the final on December 10.

The 20-women squad for Maymol Rocky has not changed much from the coach’s previous squad announcement with all the major names making the squad.

But Dalima Chhibber, who was named for the camp, has not made the final cut due to an injury.