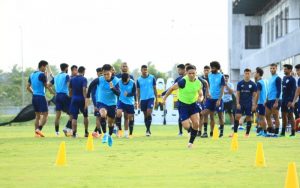 The Blue Tigers are all set to take on Jordan in a friendly match tomorrow, May 28 in Doha, their last preparatory game ahead of the 2023 AFC Asian Cup – China Qualifiers which kicks-off in Kolkata from June 8 onwards. The match against Jordan will be played at the Qatar Sports Club, and kicks-off at 9.30pm IST (7pm Qatar Time).

“Another game against a stronger team will always help,” Head Coach Igor Stimac averred. “It’s our last friendly game prior to qualifiers, and we need to get final answers on certain questions,” the coach added. “Some of our youngsters will have a great opportunity to gain more experience at international level.”

The squad has been in a preparatory camp for over a month, first in Bellary, and then in Kolkata, and the coach mentioned that the “fitness levels are quite good.”

“The fitness levels are quite good. We have another 10 days in front of us, and it should be perfect. The boys have done a great job, and they need to be rewarded with some good results in the Qualifiers,” Stimac, who was part of the Croatian World Cup team which finished third in FIFA World Cup France 98, informed.

Referring to Jordan as an opposition, the coach felt: “Jordan (FIFA Ranking 91) are ranked better than Belarus (FIFA Ranking 93) but are not as physical as Belarus. So for us it should be a bit easier in regards to the build-up, and ball possession.”

The Blue Tigers are currently ranked 106 in the FIFA ladder, and had played Belarus in an official match in the FIFA International window in March 2022, a match where they went down 0-3.

Meanwhile, the Indian squad have been bolstered with the joining of the ATK Mohun Bagan players, all of whom have missed the preparatory camp so far owing to their club commitments in the AFC Cup. “They came very late (on May 26, 2022 morning) after playing 3 games in 7 days, and hence, we need to be careful with them. We still have over 36 hours ahead for them to recover, and I will be making a decision whether to field them or not on 28th morning,” Stimac maintained.