India’s Shanmugam Venkatesh: Boys are excited ahead of the SAFF U-20 Championship!

Press Release 2022-07-14 Asia, Team India Comments Off on India’s Shanmugam Venkatesh: Boys are excited ahead of the SAFF U-20 Championship! 651 Views 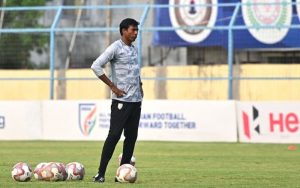 It’s a new start for the India U-20 Men’s Team that are set to play hosts in the SAFF U-20 Championship in Bhubaneswar later this month. The squad is mostly a continuation of the Indian Arrows batch that has participated in the I-League over the last two seasons, and Head Coach Shanmugam Venkatesh understands “expectations will be high.”

“India are always considered to be the best in South Asia. There’s always an expectation for us to win,” said Venkatesh. “That would be more this time, since we are playing at home. It’s a great opportunity for the boys to play an international competition under such conditions,” Venkatesh averred.

The India U-20s have been training for over a month in Bhubaneswar, the venue for the tournament. “Owing to the pandemic, these boys are playing international football after a gap of almost two years. So they are excited,” Venkatesh quipped.

India play their first match against Bangladesh on July 27. Five teams will play each other once in a round robin format with the top two teams moving to the final slated for August 5.

India are also scheduled to play the AFC U-20 Asian Cup qualifiers later in the year where they have been clubbed with Australia, Kuwait and hosts Iraq.

“We are motivated as a unit. Doing well in Asia is our main aim. The players know the value and the importance of the Asian qualifiers. We are all working to perform better,” he said. “We need more experience of playing at that level. India should be competing with the best in Asia.”

There are a number of players that have come through the junior international footballing system, especially those that have graduated from the India U-15 and U-16 side that had won the U-15 SAFF Championship before topping their group in the AFC U-16 Championship Qualifiers, netting 11 goals in three matches.

While the 2020 edition of the AFC U-16 Championship was called off due to the pandemic, the same boys have now moved ahead to the U-20 side, bringing their experience of playing at the Asian level with them.

“The boys that have graduated from the U-16 batch already have the experience of doing well in Asia. Their confidence can be infectious if directed properly. However, there are differences in every age group level. At the U-20 level, the players should be treating themselves in a professional manner, as they are just a step away from the senior team,” Venkatesh informed.

Venkatesh also feels the infrastructural and logistical help that the Odisha Government has put in for the team to train has really helped the players progress.

“Whatever the (Indian) Arrows did in the I-League in the last few years, we can’t forget the support from the Government of Odisha. We really need to thank them for opening up their facilities to us, even during a pandemic, with all the safety precautions,” he informed.