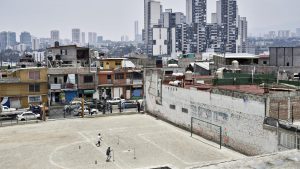 In congested cities like Amsterdam, Berlin and Paris, and Guadalajara, Mexico City, Sao Paulo and Rio, football is played where space is found. On the bolzplätze and pleintjes of Europe, and in the courtyards and streets of Latin America, the game’s beautiful rhythm is celebrated.

Matches played in these confines are decidedly quick. Subtle flicks, fast footwork and other cheeky tricks are employed to push ball towards goal. To succeed, players must master ball control and passing. The blistering pace and wit of matches on small-sided pitches elicit oohs and ahs from bystanders, who wait to cheer or jeer the next nutmeg.

Skills cemented on small-sided pitches — both physical and mental — are integral to the success of professional football players, like Alexis Sanchez, Victor Guzman, Paolo Guerrero and Gabigol. Growing up in Chile, Mexico, Peru and Brasil, respectively, each player honed his game during informal local play and translated lessons learned on small pitches to the sport’s biggest stages.

“Physical speed and mental speed are two of the most important tools for a player at any level. In my position they are essential,” says Sanchez, Chile’s star midfielder, explaining how small-sided football has helped his growth as a player. “When your opponent has the ball, aggressive bursts to shut him down and intercept possession give you the upper hand.”

For similar reasons, Guadalajara-born Guzman views small-sided as an essential element of training. “For quicker thinking, there’s no better option than small-sided games, where you are required to think fast, move your legs quickly and remain very concentrated. This is perfect for a player in my position because in midfield the game gets very congested,” he says.

“When you play small-sided growing up, it becomes natural to play at a high tempo for the whole game,” Gabigol, who hails from São Paulo State, confirms. “Even if it’s informal most of the time, it’s important training for you head and your feet.”

Sanchez, Guzman, Guerrero and Gabigol are emblematic of a generation that has not only come to love football through play in tight environments but has embraced the positive impact it has on their performance on full-scale fields. However, they don’t represent the totality of the small-sided football world. Some players have embraced small-sided as a world of its own, advancing a new style of accelerated play predicated on speed and touch, which are served by the NikeFootballX collection.

The new Nike MercurialX is designed to amplify the attributes — speed, control and quick thinking — most important to small-sided players. “When we talk about speed in relation to football it can mean many things,” explains Max Blau, VP of Nike Football Footwear. “Obviously there’s physical speed: acceleration and deceleration, quick cuts and directional changes. But there’s also mental speed: thinking fast and knowing what you plan to do two or three moves ahead. All of these aspects are extremely important in small-sided because of the reduced space and fewer number of players.”

Connection to the ball, which is essential to playing with pace, is supported in the Nike MercurialX in several ways. First, the integration of a Flyknit upper helps improve touch on the ball and locks the foot over the sole unit to support quick movement. A tri-star pattern with natural flex groves maximizes traction, and also, thanks to a Nike Free-inspired midsole, offers a barefoot-like feel which helps solidify underfoot ball control. The MercurialX is completed by integrated full-length Phylon cushioning engineered for the rapid acceleration and deceleration of the small-sided game.