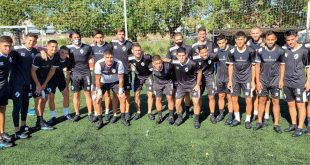 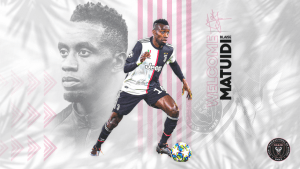 “Blaise is one of the most successful midfielders of his generation and we’re thrilled to have him at Inter Miami,” said Paul McDonough, Inter Miami’s COO & Sporting Director. “His world-class quality and leadership will be key attributes for the Club.”

“I couldn’t be happier to welcome my friend Blaise to Inter Miami. He is an exciting and gifted player and a great person,” said co-owner David Beckham. “To have a World Cup winner of Blaise’s quality in our new team is such a proud moment – for us as owners and for our fans. For me personally, to have a former teammate joining our Club is very special and I can’t wait to welcome him and his beautiful family to South Florida.”

Matuidi, who will wear the Club’s No. 8, has compiled an extensive list of titles and accolades in his career thus far at both the club and international level. Not only is he a one-time World Cup, four-time Ligue 1 and three-time Serie A champion, but also a three-time Coupe de France, four-time Coupe de la Ligue, five-time Trophée des Champions, and one-time Coppa Italia and Supercoppa Italiana champion. The midfielder was also named the 2015 French Player of the Year and selected to the Ligue 1 Team of the Year twice.

On the international stage, Matuidi has represented France from the youth teams through the full national team starting with his senior debut in 2010. Since then, he has made 84 senior appearances for Les Bleus, registering nine goals and 10 assists across all competitions. The Toulouse-born midfielder appeared at the 2016 UEFA EURO, as well as at the 2014 and 2018 FIFA World Cups. The 33-year-old played in five and started four of the team’s seven matches en route to the 2018 title, including the final against Croatia. Matuidi becomes the only active World Cup-winner currently playing in MLS.

The left-footed midfielder most recently played for prestigious Italian side Juventus, who he signed for in August 2017. There, Matuidi helped the Bianconeri win the Serie A title in all three of his seasons with the club along with the two cup titles, totaling 133 appearances, eight goals and seven assists for the team. Those 133 appearances were the second-most of any Juventus player in the three-year time period in which he was with the club. He also made 23 appearances and registered two goals and one assist for Juventus in the UEFA Champions League, Europe’s premier continental club competition.

Prior to joining Juventus, Matuidi spent seven seasons with French giant Paris Saint-Germain where he played alongside Beckham in 2012/13. With Les Parisiens he helped lead an era of prosperity, including a stretch of four consecutive Ligue 1 titles from 2012-16 and 12 total cup titles in his seven years. In total, he made 295 appearances for the team, tallying 33 goals and 28 assists. In that time he made 45 Champions League appearances, tallying six goals and nine assists.

From 2007-11, Matuidi played for French side Saint-Étienne where he made 154 appearances in all competitions and registered three goals and six assists. From 2004-07, he played for Troyes, making his professional debut for the team in Ligue 2, France’s second division. The team was promoted to Ligue 1 following his first season and he went on to make 69 total appearances for the club, tallying four goals and two assists.

Inter Miami resumes its inaugural season on August 22, when the Club plays its first match at Inter Miami CF Stadium. Inter Miami will face regional opponents in the initial phase of MLS’s continuation of play in local markets.