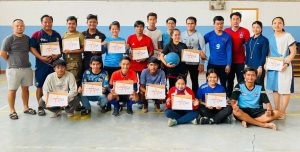 The AFC Dream Asia Foundation’s collaboration with the Indochina Starfish Foundation (ISF) will reach new territory when the ISF-AFC Dream Asia Legacy Project stretches to the Battambang province of Cambodia.

As part of the Memorandum of Understanding (MoU) signed between the Asian Football Confederation (AFC), Football Federation of Cambodia and the ISF, the five-year programme seeks to empower children from underprivileged backgrounds by increasing access to sports, improved health, and opportunities to build life-skills.

Since the commencement of the ISF-AFC Dream Asia Project in 2020, as many as 375 coaches across Cambodia have received an opportunity to embark on this journey towards a healthier way of life.

After making a difference to over 4,000 children, the ISF-AFC Dream Asia Legacy Project is now ready to bring three schools in the Battambang province under its wing and give children in the region the rare opportunity to play football.

Under this initiative, the ISF will partner with three schools in the province which will have three teams of approximately 20 players each, culminating in a total of 160 to180 players.

Over the years, the initiative has succeeded in implementing several capacity-building programmes, namely the Youth Coach Development Pathway, the Continuous Coach Development Pathway, and the Social Impact Training for Coaches and Young Leaders, which have worked tirelessly towards assisting the participants to emerge as self-sufficient and skilled members of society.

Most youngsters who have taken part in the programme, have acquired the skills and knowledge necessary to become at least part-time coaches at ISF with the potential of being considered for full-time coaching positions under the ISF’s Football Programme in the future.

Staying true to their aim of enabling underprivileged children and their communities to improve economic and social standards, the ISF will train and empower three coaches and one province coordinator in Battambang to become experienced professionals who can run the football and social impact training in partner schools and become leaders of the community.

An instance of ISF’s social impact training is the inspiring story of young Rina, an ISF Football Coach who fought against all odds to discover her innate talent and love for the sport as well as her ability to lead.

From shrugging off societal pressure to becoming an inspiring role model for young girls, Rina is a shining example of how far beyond the pitch football, and sports in general, can take you.

Speaking of her experience with the ISF, she said: “I started playing football because it was fun. “Now football has become an important part of my life – helping me find myself, my strengths, and giving me the tools that I need for a successful future.”