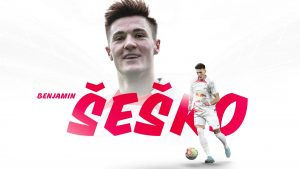 RB Leipzig have added an exciting teenage talent to the squad, completing the signing of Slovenia international Benjamin Šeško. The 19-year-old will join the club from FC Red Bull Salzburg on July 1, 2023 and will sign a five-year contract until summer 2028. The forward will spend the 2022/23 season at the Austrian Bundesliga champions.

After spending his youth career at NK Krško and NK Domžale in his native Slovenia, the 1.95-metre-tall attacker joined Red Bull Salzburg in 2019, before a loan spell at second-division side FC Liefering.

In the 2020/21 season, Šeško scored 21 goals in 29 games to help Liefering achieve second place, before making the breakthrough into the Salzburg first team the following season. Šeško went on to make 37 competitive appearances for Salzburg in the 2021/22 season, including six UEFA Champions League games, scoring eleven goals and registering six assists.

Šeško won the domestic double last season and was the top scorer in the Austrian Cup with five goals in five games.

The forward has represented Slovenia at all youth levels and made his full international debut a day after his 18th birthday on 1st June 2021. In total, Šeško has made 13 appearances for his country and scored two goals, the first of which came in a 4-0 win over Malta ion 8th October 2021.

RB Leipzig technical director Christopher Vivell said, “Benjamin Šeško is one of Europe’s best young talents and has a great amount of potential to become one of the best. He offers a lot in his game, he’s extremely fast, has a great jumping reach and is strong in the air. Benjamin has a true eye for goal and, despite his height, is technically gifted and mobile. His qualities make him a unique and special player.”

“I’ve known Benjamin since he was 15 and was able to convince him to come to Salzburg in 2019. Since then, I’ve followed his development closely and have seen every goal that he’s scored. The best option is for Benjamin to continue in Salzburg for one more year and mature before coming to Leipzig. We’re already looking forward to that a lot.”

RB Leipzig commercial director sport Florian Scholz said, “In signing Benjamin Šeško, we’ve managed to pull off a brilliant transfer. We’re very proud that Benjamin has decided to come to RB Leipzig because he had a lot of offers from other clubs and we had to beat off great competition. His transfer to Leipzig next year is in line with our club ideology of continuing to develop young and highly-talented players alongside experienced transfers.”

New RB Leipzig signing Benjamin Sesko said, “I’m very happy to be able to make the move to RB Leipzig in 2023 and that the transfer is now confirmed. RB Leipzig are one of the best clubs in Germany and are establishing themselves as one of the best in Europe year on year. A success story has been written here in just a few years and I want to be a part of it in the future.”

“The club’s philosophy of placing trust in young players and playing attractive, attacking football is a perfect fit for me. The city, the stadium and the whole infrastructure at RB Leipzig, as well as the many good discussions with the club, convinced me that this move is absolutely the right decision. My focus is now on the season with Salzburg, that I want to use to continue developing and be as successful as possible.”