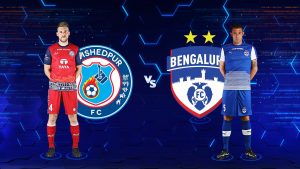 Jamshedpur FC welcome Bengaluru FC for their Indian Super League (ISL) 2017-18 home encounter at the Kalinga Stadium in Bhubaneswar on Sunday. The hosts have been defensively robust this season, conceding the least number of goals (13) while also maintaining the maximum number of clean sheets (7). Unbeaten in their last four, which also includes a run of three consecutive victories, Jamshedpur will look to get closer to sealing a playoff spot with a win. Bengaluru, on the other hand, have been the best team this campaign with their eye-catching and free-flowing football. They are the only team to have qualified for the playoffs so far and are unbeaten in their last six matches, which also features a five-match winning run.

The Brazilian has been the midfield engine for his team. A tireless player, Goncalves is the initiator of countless attacks and counter-attacks while also ensuring he tracks back and performs his defensive duties to a tee. The 21-year-old loves surging forward into the box and has four goals to his name already, making him an important player for Jamshedpur when they come up against Bengaluru’s imposing defence.

The Australian has anchored the Blues’ midfield to good effect with his towering presence. His powerful runs down the middle has helped Bengaluru launch countless attacks while he uses his strength well to hold off opposition attacks. A massive target at set-plays, Paartalu has three goals as well as two assists to his name so far and will be looking to make his presence felt against Jamshedpur.

Albert Roca will probably go for a 4-1-4-1 formation, which relies heavily on their midfield and flanks for proper service to the striker.

Bengaluru head coach on his team’s approach for the remaining games: “For me, it is always to get better and better. Every game is different, we have to pay attention and be in good shape. We have to now try to get better in the next two games because now we’re in the play-off and we just have to be prepared for the difficult moment. Now it’s time to try to be even better just to be ready and try to have more options.”

Steve Coppell may use a 4-2-3-1 formation that provides enough options in the middle and the flanks.

Jamshedpur head coach on the strategy his team would apply henceforth: “We don’t change strategies – we play the way we play. We aren’t going to change anything. We try to defend when we don’t have the ball and attack as much as we can with it. At this stage of the season, many times it’s not about how you play, but just about the results.”

– Bengaluru have scored the most number of goals this season (31), while Jamshedpur have conceded the least (13)